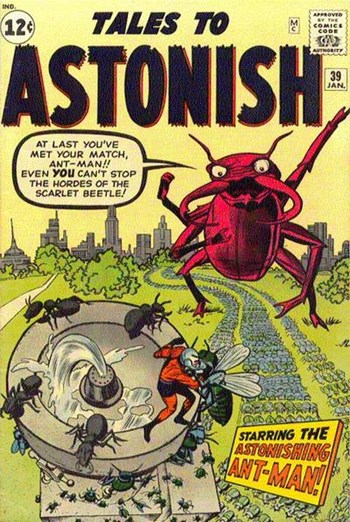 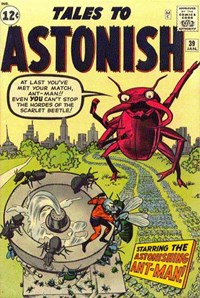 1 The Vengeance of the Scarlet Beetle! (Ant-Man) Comic story, 10 pages

"Your days of meddling are ended, Ant-Man!"

Ant-Man fights a beetle made super-intelligent by radiation. It uses Ant-Man's growth gas to become giant, but he is able to defeat it.

"All of the fancy clothing stores on Main Street were doing a..."

An old-fashioned shopkeeper unwittingly saves the life of a boy from Mechanica when her remedy oil lubricates the gears in his brain.

A factory worker laid off to be replaced by a machine foils a seemingly invincible alien by cutting off his power source.

"How can anyone possibly dream up a fantasy story as simple as a few toy soldiers?"

A boy who enjoys toy soldiers buys a new civil war figure to place in his prisoner of war stockade. That evening, he and his father are attacked by an invader from the sixth dimension. Suddenly, the lights go out, and when they turn the lights back on, the invader has disappeared. They chalk it up to some sort of unusual shared dream, and go back to sleep. The following morning when the boy wakes up and peers into his model stockade, he sees the invader languishing in the cell guarded over by the toy soldier.