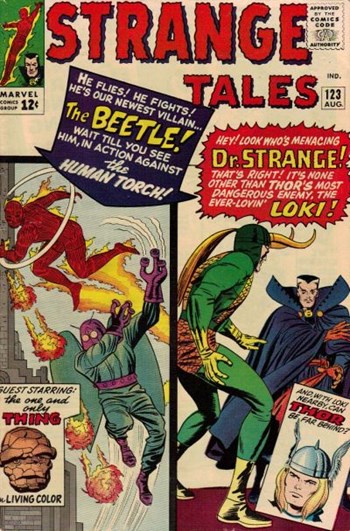 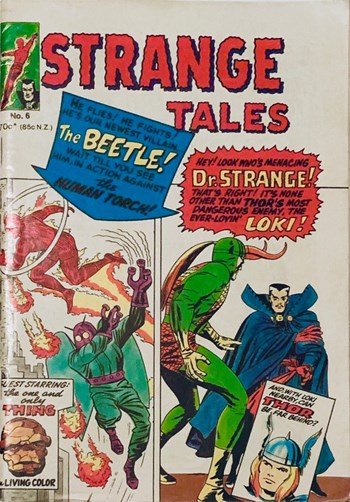 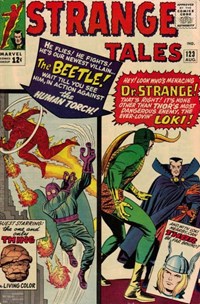 1 The Birth of the Beetle! (The Human Torch) Comic story, 14 pages

Mechanic-inventor Abner Jenkins creates the identity of The Beetle. While taking the Fantasti-Car for a double-date, Johnny & Ben wind up being humiliated by The Beetle. But when he tries to rip off the NY World's Fair, the rematch goes the other way.

Carl Burgos was the creator of the original Human Torch! The Beetle next appears in Amazing Spider-Man (Marvel, 1963 series) #21 (February 1965). Colors credit for Stan Goldberg removed due to lack of attribution.

Strange practices the art of levitation. Meanwhile, in faraway Asgard, home of the Norse Gods, Loki, God of Mischief, plots as always. He contacts Strange and tries to convince him that he is a prisoner of Thor, who is evil and deceiving his father. Strange uses a spell to take Thor's hammer, but on examining it, can sense no trace of evil. Realizing he's been had, Strange battle Loki, who later swears vengeance against the mage.

Loki would seek revenge against Strange the very next month in Journey Into Mystery #108 (September 1964).

A man becomes confused over directions to the dentist and as a result accidentally pilots an expedition to claim a new planet.

Distributed to newstands in May 1964. This issue includes 10 pages of paid advertisements.