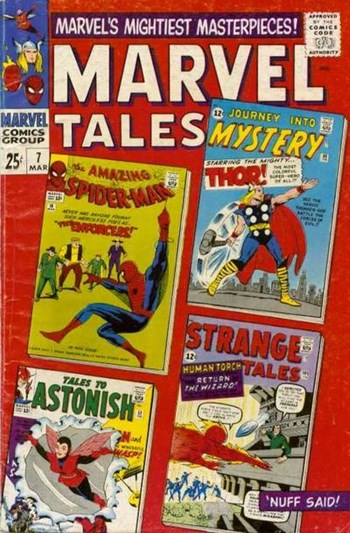 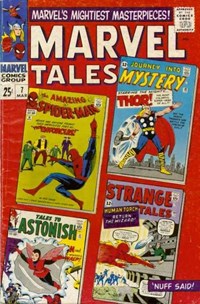 In prison, The Wizard becomes a model prisoner-- just so he can become a trustee, work in the hospital, have access to chemicals... and break jail! The police soon have him surrounded in his house, but can't get in because of its defenses. He challenges the Torch to a battle to decide who is the better man. Against Sue's advice Johnny accepts the challenge, and he does pretty well until Sue shows up to "help" him (again!). Thanks to her, he's caught, and both are almost killed in a bomb blast. But Johnny manages to free them both, get rid of the bomb, and corral the "superior intellect".

2nd appearance of The Wizard. 1st time a "Human Torch" villain returned; Wizard would go on to a very long career, mostly with "The Frightful Four". Next appearance in STRANGE TALES #110 (July 1963), where he teams with Paste-Pot Pete for the 1st time.

3 Not What They Seem (Wasp) Comic story, 5 pages

4 The Thunder God and the Thug (Thor) Comic story, 13 pages