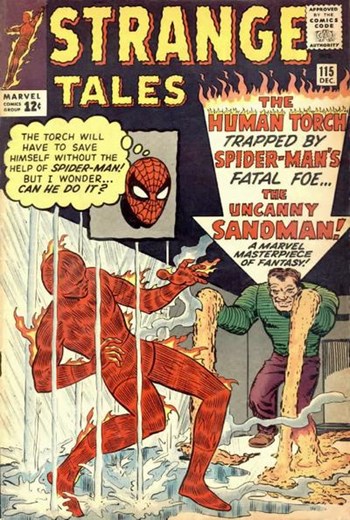 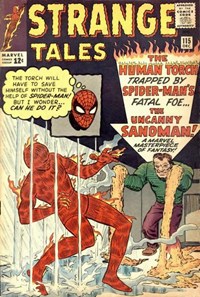 Reed tells Johnny the news that The Sandman has broken jail, and he thinks of the villain's earlier battle with Spider-Man. Johnny runs across him on the George Washington Bridge, but Sandman eludes him. Meanwhile, atop the Empire State Building, Spider-Man uses a loudspeaker to send out a message daring Sandman to fight him! Before long, Sandman shows up and knocks Spidey right off the building. But the Torch also shows up, and he & Sandman battle inside the building. Running thru a set of sprinklers, Sandman figures the Torch's flame will be put out, but suddenly realizes he's turning to mud-- his own weakness! After clobbering Sandman & turning him over to the police, Johnny departs, while Spidey thinks he doesn't like the Torch cutting in on "his" action.

At the The Ancient One's mountain home somewhere in the Himalayas (in India), Dr. Stephen Strange arrives seeking healing. The aged mystic discovers Strange was a surgeon who cared only for money, nothing for humanity until one day he was in a car crash, which damaged the nerves in his hands, destroying his career. Rather than become a consultant, he wasted his life and money seeking a cure, finally searching out possible occult means of restoring his talents. Because his motives are selfish, The Ancient One refuses to help, but suggests if Strange remain and study with him, he may find a cure on his own. Snowbound, he's left no choice but to remain. Before long, he discovers Baron Mordo, The Ancient One's disciple, is trying to kill his mentor thru mystic means, with the aid of some being named "Dormammu." Unable to warn The Ancient One because of a spell, he suddenly realizes the terrible dangers threatening all humanity and offers to become a disciple, whereupon The Ancient One reveals he knew of Mordo's spell, and evil intent, and has been keeping a watch over him. Now, with Strange as his new disciple, there's hope that Mordo may one day be stopped. Strange begins years of study to become a Master of the Mystic Arts!

Episode #4. 1st mention of "Dormammu." "India" later changed to "Tibet." Stan Lee says they "forgot" to tell Strange's origin before this. Judging by the evolution of the artwork, it appears this was at least the 9th episode drawn! All other episodes up to STRANGE TALES #120 (May 1964), Strange resembes Vincent Price; in this and later ones, he resembles Ronald Colman. Certain plot elements somewhat similar to those in the Frank Capra film, LOST HORIZON (1937). This is the only episode in Steve Ditko's run that actually feels like a Stan Lee plot.