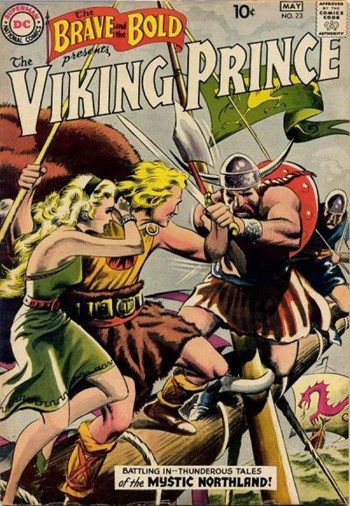 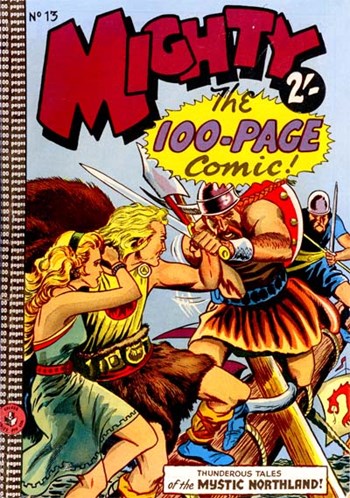 Ads for various gags and gadgets.

Another new direction. No more Twelve Tasks of Thor to regain his kingdom, no more Gunnda... King Rikk, the Storm Cloud, raids England and trains teenage Jon to be his successor. He's also betrothed to Princess Asa, and they hate each other. But the Mute Bard draws sinister visions from the smoke of dragon ships, cages, and weeping...

"There was a weight lifter named Lane..."

Jon trains hard, fishing by hand, fighting blindfolded. Asa eschews womanly tasks to be a Viking Maiden. Then King Rikk's ship wrecks on rocks and is captured. Jon and the Bard escape by water. They crawl ashore and Jon infiltrates the castle. His father is held in a cage, Asa a captive. Jon battles them all, pulls down a canopy and defeats Torgo. They sail for home, wondering about "startling adventures we shall see..."

"There once was an archer named Park..."

10 The Figurehead of the Burning Sea! (The Viking Prince) Comic story, 11.67 pages

While at her father's castle with Prince Jon, Asa vanishes into thin air. Jarl Eric, brother of the Dragon King, imprisoned her spirit in a wooden figurehead. Jon sets off to rescue her. He hauls her wooden form up in a net, but is captured. He must fight Jarl Eric wearing a hood, then escapes to his boat with the figurehead as a volcano sets the sea afire. Jon sacrifices his drinking water to save the wooden figurehead - and she returns to life! Fleeing, they skirt a maelstrom and Eric's ship sinks. Back in Asa's kingdom, Jon is rewarded with a kiss!

"There once was a rocket-ship ace..."

Ad for stamps from the various countries in the British Empire.

Ad to recruit salespeople to sell plaques with religious and sentimental mottoes.

14 How to Gain up to 50 Lbs. of Mighty Muscles! (Jowett Instiute of Physical Training) Advertisement, 1 page

Ad to recruit salespeople for flower and vegetable seeds.

Script and art credits for stories and fillers verified from copies of DC editorial records sent to Gene Reed from Nelson Bridwell in 1986.