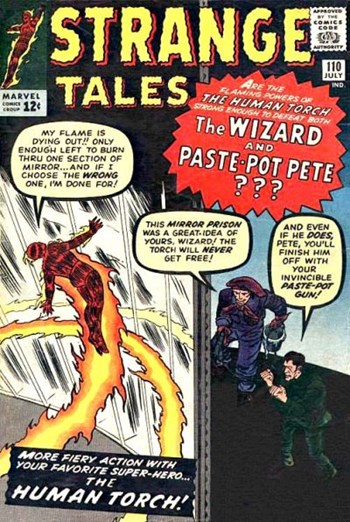 Johnny practices on his obstacle course, then thinks back on his adventures with The Wizard and Paste-Pot Pete. By a wild coincidence, Pete breaks The Wizard out of jail and the two join forces. They frame Johnny as a spy, but their partnership is strained by Wiz's megalomania. "I'm a partner, not a servant, you know!" says Pete.

More humor than usual in this issue. First time these two villains teamed up in what would become pretty much a lifelong partnership!

A quiet new worker at the plant turns out to be a friendly alien who finds mechanical work easy to learn after walking through space.

A space expedition discovers what they believe is a savage human-like species and flee, not suspecting that they are an advanced psychic race able to meet all their needs through thought.

Doctor Strange is called on by a man having bad dreams, and confronts Nightmare. The man’s dreams reveal that he is guilty of fraud and Strange makes him confess.

This is the first Doctor Strange story. It's clear there's a lot of history between Strange and Nightmare. Doctor Strange resembles Vincent Price, who played a magician in the Roger Corman-Edgar Allan Poe film, The Raven (1963).

The on-sale date is the publication date reported in U. S. Copyright Office filings.