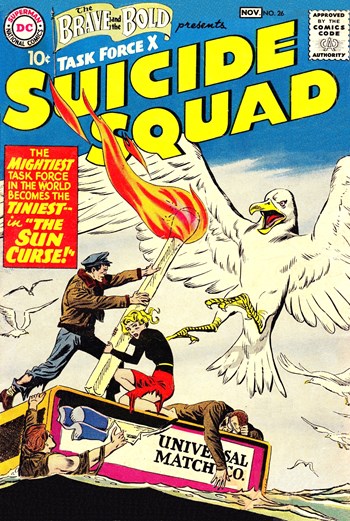 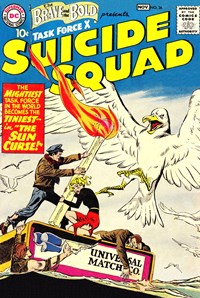 Dr. Duane is missing, apparently having created a formula that grows things to giant size. Headquarters fears that Dr. Duane has been captured by enemy agents, and orders Suicide Squad to investigate unofficially. The team books into a nearby resort so as to search surreptitiously. A giant monster seizes both Karin and a nuclear bomb being tested with a time device. Knocking the monster out with anesthetic the men free Karin, then tow the monster out to sea where the bomb explodes harmlessly. Suicide Squad regrets the monster's death, as they all surmise it was originally Dr. Duane.

"Everything you need to enjoy stamp collecting..."

On the page immediately following page 6 of the main story sequence. Ad, with order coupon, for stamps and supplies from Zenith Company.

Various scientists around the world demonstrate uses of radio-isotopes.

On the page immediately preceding page 7 of the main story sequence. Published in cooperation with the National Social Welfare Assembly. Even though published in 1959 -- before decolonization and before the height of the American Civil Rights battle -- non-white scientists are shown doing the work in their own countries across the globe.

On the page between page 12 and page 13 of the main story sequence. Ad, with order coupon, for binoculars from Josely Co.

On the page between page 12 and page 13 of the main story sequence. Ad, with response coupon, from Wilson Chemical Co.

7 The Menace of the Driver Ants! Text article, 1 page

On the page immediately following page 18 of the main story sequence. Description of driver ants and their habits.

On the page immediately preceding page 19 of the main story sequence. Description of V-1 bombs and the German attacks on London.

"Do you want spending money?"

Inside back cover. Ad, with order coupon, for information from Jowett Institute of Body Building

Back cover. Ad, with order coupon, for information from Daisy Manufacturing Company.