The All Favourites Comic Annual #2 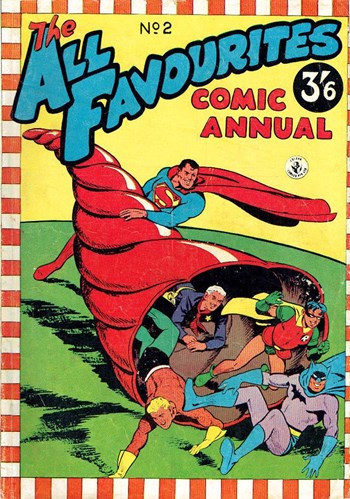 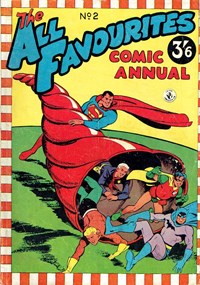 "I hear this movie is awful!"

2 The Books That Couldn't Be Bound! (Superman) Comic story, 12 pages

A rather strange bookbinder binds books in exteriors that illustrate the contents of the book, and Superman learns that three members of this man's club demand their books be bound in strange and unusual bindings. The Man of Tomorrow agrees to help out, since the money to be paid for the bindings will go to his choice of charities. Little does he know that Lois has a book she wants bound too: in the Man of Steel's own cloak!

Silver Smith tries to make Superboy afraid to use his powers.

8 The Man Who Could Change Fingerprints (Batman with Robin the Boy Wonder) Comic story, 10 pages

"It's such a nice day Pete. Why aren't you outside?"

Batman and Robin are rendered unconscious by a sting from a strange winged man, only to awake in a weird city inhabited by winged men, who want to operate on Batman to give him wings in order to track down desperate felons. The Batman takes to the air, like his namesake, on the trail of Slits Danton, all thanks to the creation of special "bat wings" created by a scientist...or so the Caped Crusader thinks!

Artwork has been partly combined and reduced to include a Boltinoff strip at the end.

"Mother, can I have the candy that was left in the box on the dining room table?"

Superboy visits the moon with an absent-minded professor.

18 The Ship That Dared Not Land (Aquaman) Comic story, 6 pages

Three sailors have kept their ship at sea for ten years without docking at any port.

19 Just 9d a Day to Learn to Play this Amazing New Way! (The Sampson School of Music) Advertisement, 1 page

Feature
The Sampson School of Music