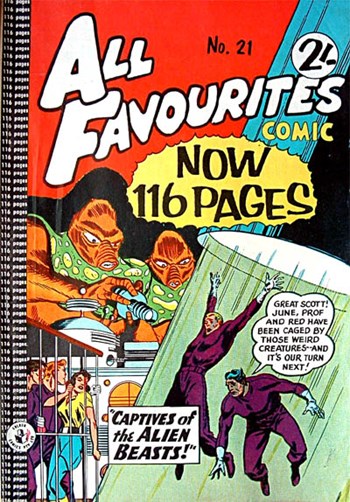 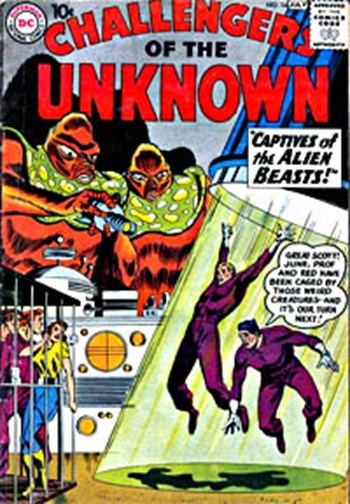 Cover Captives of the Alien Beasts! (Challengers of the Unknown) Cover, 1 page

"Great Scott! June, Prof and Red have been caged by those weird creatures--and it's our turn next!" 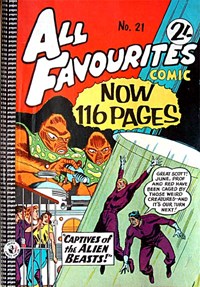 1 Captives of the Alien Beasts (Challengers of the Unknown) Comic story, 13 pages

"You will be the first man ever to land on Mars!"

Johnny Thunder rides shotgun on a stage on a plain, but the Gopher Gang pops up out of hidey-holes. JT is coshed from behind, his head bandaged. The Sheriff wishes his son, John Tane (JT's secret identity), would fight beside him rather than teach school. The Gopher Gang raids a bank. Sheriff Dad is hit, and JT tries to protect him, but is brushed off. JT fells the gang and reverts to John Tane - in a hat to cover his bruise! For the first time, the Sheriff wonders if his son is Johnny Thunder, but no, John is felled by a sign and clonked on the head! "I'll never be sure..."

6 Untitled (The Fox and the Crow) Comic story, 4 pages

8 Untitled (The Fox and the Crow) Comic story, 4 pages

"Joy, oh Joy!! I'm the most fortunate fox in the whole wide world!"

9 The Beast from the Deep (Tomahawk) Comic story, 9 pages

10 The Beast from the Invisible World (The Space Ranger) Comic story, 9 pages

Rystan, a police officer from the invisible world of Ulix, helps Space Ranger and his friends battle the monster Kragg.

A friendly alien defends Earth and stops a band of alien invaders.