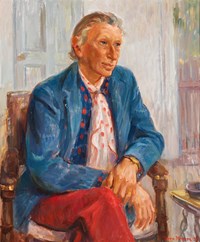 Lahm's family migrated to Australia in 1929. He studied at East Sydney Technical College, where a fellow student named him 'Hotpoint'. He started using the pen name and soon changed it to 'Hottie'. His first published cartoon was in The Sydney Mail in 1930, ahead of graduating from the Advanced Art Course (The Sydney Morning Herald, 23 January 1931).

From 1932, he began freelancing for Smith's Weekly and The Bulletin, as well as Associated Newspapers' The Sun and The Australian Women's Weekly, with whom he developed a long-standing association. He is particularly known for his cartoons and caricatures.

Lahm's first cartoons for KG Murray's Man appeared in December 1936. The following year, he created the popular Snifter, an incontinent dog that became a patriotic symbol during the second world war and featured in a number of booklets to raise funds for the war effort. In May 1949 a younger version called Snifter Junior began on the inside back page of Man Junior. Lahm drew Snifter until Man was cancelled in 1974, around the time Lahm's retired.

In 1951, he created the comic strip Snowy McGann for The Sunday Sun (3/6/1951), which initially promoted it heavily to replace Ginger Meggs after Bancks moved to the Sunday Telegraph. When The Sunday Sun and Sunday Herald merged in 1953, the series continued in The Sun-Herald, probably running until episode #169 on 29 August 1954.

Lahm illustrated a number of children's books, including his own book Paddy Bow-Wow (1947). He worked as a commercial artist, occasional photographer, and painter. He was shortlisted for the Archibald Prize in 1969. People magazine calling him 'one of Australia’s busiest and most original artists' (2 August 1950). Very little of his original artwork remains, with most destroyed when newspapers closed or merged.

He was a founding member of the Sydney Wine and Food Society (~1945).

Some reports incorrectly state Lahm was born in 1913. His gravestone records his nickname as 'Hotty', many other sources use 'Hotti' and 'Hottie'. The Catholic Weekly 7 June 1951 includes an interesting account of the origins of Snow McGann (http://nla.gov.au/nla.news-article146742759).