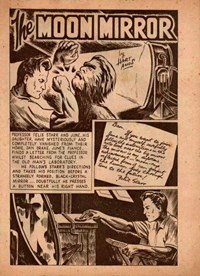 Hart Amos was born in Lindfield, NSW, Australia, in 1916. He studied drawing and painting at East Sydney Technical College between 1933 and 1937, after which he served in the army until 1945. After the war, he started working as a freelance comic artist for the K.G. Murray Publishing Company. He worked on the stories The Lost Patrol, Moon Mirror and Stark the Stoneage Man.

Hart Amos is most known for the numerous covers on KG Murray's DC reprints and the Australian series Devil Doone, which he worked on from 1946 to 1969, with writer R. Carson Gold. After leaving KG Murray, Amos worked on John Dixon's "Air Hawk and the Flying Doctors" from March 1970 until June 1977, when he retired.

Year of birth has also been reported as 1914.