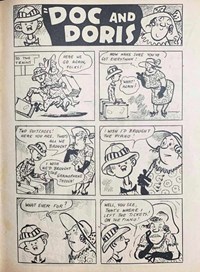 Mercier came to Australia by the age of 21 and became an Australian in 1940. After his arrival, he worked in manual jobs while learning English. He attended Julian Ashton's Sydney Art School and sold his first cartoon to Smith's Weekly in February 1923.

Over the next 40 years, Mercier drew cartoons and comic strips for many newspapers and magazines, including Smith's Weekly, Aussie, Melbourne Punch, Melbourne Herald, Daily Telegraph, Daily Mirror, Bulletin, Sydney Sportsman and the ABC Weekly. He worked for the Truth/Sydney Sun from 1949 until his retirement in 1971. His cartoons were syndicated to newspapers across Australia.

Mercier provided humourous cartoons for advertising campaigns, such as Advanx Tires (1927). With his second wife Flora, he produced alphabet primers and children’s books. From 1950, Angus & Robertson published collections of his cartoons in book form.

He was a member of the the Black and White Artists' Society and regularly contributed to the International Salon of Cartoons, which exhibited in the Montreal International Pavilion of Humour, Canada.

After retirement he continued to produce cartoons for the Sun and then for the Wine & Spirit Buying Guide (1976-80).