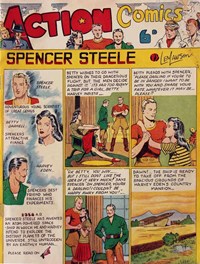 Published in October 1946 by John Huston Publishing, a partnership between H. John Edwards and John Huston.

While many Australian publishers disguised the international origins of their comics, H. John Edwards reprints were branded with the logos of US companies such as Fiction House, Standard and MLJ Magazines (Archie).

He also published a large line of original Australian comics with art by some of this country's most accomplished artists, including Larry Horak, John Dixon and Jeff Wilkinson. 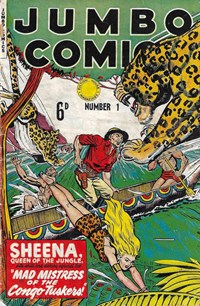 Reprints from US Fiction House.

Henry John Edwards was born in Victoria in 1913. He worked as business manager for K. G. Murray and was involved in the creation of Man, Man Junior and Cavalcade before becoming a publisher himself,11p. 184, John Ryan's Panel by Panel...   producing thousands of comics, trade magazines, paperbacks and hard cover novels.

When the partnership with Houston ended in 1947, Edwards established his own company22p. 184, John Ryan Panel by Panel. There is limited information on Peter Huston and it is unknown whether details...   and retained the Action Comic series, after which he later named his company. 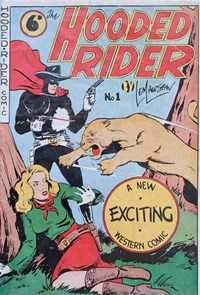 Edwards' was also the third largest producer of pulp novels in Australia during the 1950s, behind Cleveland and Horwitz.44Katherine Bode reports Action Comics published 180 books during the 1950s, 9.4% of the novels known to be published. Katherine...

H. John Edwards benefitted from the specific publishing enviornment in Australia in the 1940s and 1950s, especially import bans due to the Second World War and continued tariffs on American publications from 1939 to 1959. The company ceased publication in 1959,55The date when the company ceased publication is uncertain. At least 1959 seems likely based on the often reported 13...   likely a casualty of the end of tarrifs and the arrival of television in Australia.

The popular Action Comic helped establish Edwards' company and notched up over 130 comics over 13 years, yet it is possible that it also helped contribute to the company's demise through the infamy of its creator, Len Lawson.

1
p. 184, John Ryan's Panel by Panel
2
p. 184, John Ryan Panel by Panel. There is limited information on Peter Huston and it is unknown whether details are based primarily on the change of publisher listed Action Comic from Peter Huston to Leisure Productions in 1947. Peter Huston published predominantly children's books and novels from 1944 until around 1952. The company also published the Contemporary Photography magazine from 1946-1950. No other comic series is known to have been published by Peter Huston.
3
The tone of some references to Leisure Productions suggests that H. John Edwards might have acquired Leisure Productions. The publisher name is rarely used, with the term dominant mainly on the pulp series titles Leisure Detective, Leisure Romance and Leisure Western.
4
Katherine Bode reports Action Comics published 180 books during the 1950s, 9.4% of the novels known to be published. Katherine Bode, "From British Domination to Multinational Conglomeration? A Revised History of Australian Novel Publishing, 1950 to 2007" (digitalcollections.anu.edu.au, retrieved 28 April 2013). Notably, the top five pulp publishers in the 1950s—Horwitz, Cleveland, Action Comics, Calvert and Angus & Robertson—all produced comics, although only a few non-standard format comics were published by Angus & Robertson.
5
The date when the company ceased publication is uncertain. At least 1959 seems likely based on the often reported 13 year run of Action Comics beginning in 1946. However, pulp novel publication has been reported to have ceased by 1957. There are some reports of publications in the 1960s; however, most seem likely to be estimated dates for material that is undated.