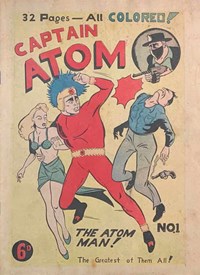 Capitalising on the success of KG Murray's Superman reprints, Atlas Publications entered the comics field in January 194811This date is from p. 190 of John Ryan's Panel by Panel. All of Atlas Publications' output was undated, with...   with Captain Atom, a full colour comic by Australians Arthur Mather22Arthur Richard Mather (b.1925) left school aged 15 to become a printing apprentice at The Truth. He also provided political...   and Jack Bellew33Jack Bellew (?- 2009?) had a respected and influential newspaper career at the Daily Telegraph (owned by Frank Packer’s Consolidated...   (as John Welles).44Early issues also included Australian backups—Jim Atlas and Dr. Peril of Iggo by Stanley Pitt (known for his later science...   Wartime bans on imported periodicals were still in place at the time, creating strong demand for new local periodicals.

While early Atlas comics mimicked the look of Murray's contemporary comics, the company quickly created a strong identity by being one of the few Australian comics' publishers to consistently brand its publications on the cover. Until 1951, most of its comics were also printed in a distinctive landscape format that was better suited to its dominant newspaper reprints.

According to Australian comic historian John Ryan,55Page 190, John Ryan, Panel by Panel (1979: Cassell)....   Atlas was founded by Bellew and newspaper colleagues, George Warnecke66Glen William (George) Warnecke (1894-1981) was an associate of Frank Packer and is credited with some of the...   and Clive Turnbull.77Stanley Clive Perry Turnbull (1906-1975) was born in Tasmania and joined The Mercury newspaper in 1922 before moving to the...   However, their participation in Atlas is largely undocumented, suggesting some embarassment at their role in establishing the Australian comic industry and supporting claims that this publishing initiative was primarily itended as a platform for more reputable publications.88See Kevin Patrick's Arthur Mather: Man of the Atom.... 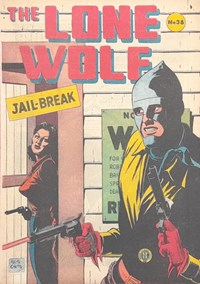 Like KG Murray, Atlas soon abandoned costly colour—Captain Atom became black and white with issue 17.99Atlas stopped using colour around mid-1949. KG Murray was also reducing its colour output at that stage with. Captain...   However, its bold introduction and dynamic artwork ensured it remained one of the company's most profitable properties. The first issue of Captain Atom sold 100,000 copies and, during the 1950s, Captain Atom Fan Club advertisements reported over 75,000 members.1010Page 190, John Ryan, Panel by Panel (1979: Cassell). Varous reports have Captain Atom selling a million copies during...

Building on the success of its original Captain Atom series, by 1949 Atlas was expanding quickly into black and white reprints of popular newspaper strips such as Tommy of the Big Top, Sergeant Pat of the Radio-Patrol, Terry and the Pirates, Rip Kirby and Garth—alongside more obscure properties such as The Sea Hound.

While most of its output was reprints, Atlas is most remembered for its Australian comics. Two early original series were Keith Chatto's The Lone Wolf, later also drawn by Yaroslav (Larry) Horak, and Terry Trowell's Grey Domino.

Using its reguar artists Horak and Mather, Atlas also produced original Australian material for some of its newspaper strip series, such as Brenda Starr (Larry Horak), Sergeant Pat (Larry Horak, Andrea Bresciani and Arthur Mather) and Secret Agent X9 (as Flynn of the FBI, by Arthur Mather).1111See Kevin Patrick's "Flynn of the FBI: Case Closed!" at Comics Down Under....   It isn't known whether Atlas lost the rights to these properties or simply sought to increase sales through the production of new work.

1
This date is from p. 190 of John Ryan's Panel by Panel. All of Atlas Publications' output was undated, with few contemporary records, so fixing precised dates is difficult. I'm reliant on dates suggested in books such as Panel by Panel and Bonzer (Ed. Annette Shiell), as well as various internet contributions from Kevin Patrick.
2
Arthur Richard Mather (b.1925) left school aged 15 to become a printing apprentice at The Truth. He also provided political and sporting cartoons to various publications, including eventually The Truth. Following a chance meeting with Jack Bellew, Mather was invited to create Captain Atom. For Atlas, Mather also drew Sergeant Pat and Flynn of the FBI. When his association with Atlas ended around 1957/58, Mather worked briefly in television and then in advertising. In 1975, his first novel, The Pawn (Wren Publishing, Melbourne), was published. He retired in the early Eighties, with a further seven novels published 1979-1989. For further information, see Kevin Patrick's Arthur Mather: Man of the Atom.
3
Jack Bellew (?- 2009?) had a respected and influential newspaper career at the Daily Telegraph (owned by Frank Packer’s Consolidated Press). In 1938, internal politics in the Australian Labor Party led to the left taking control of the Labor Daily and renaming it the Daily News. Jack Bellew transfered from the Telegraph, taking with him two sub-editors and several other staff members. In July 1940, Daily News was sold to Consolidated Press and soon discontinued. Given the extensive involvement of Telegraph staff, it seems that the entire incident was an orchestrated takeover. Bellew is responsible for Sidney Nolan separating his paitings "Burning at Glenrowan" and "Siege at Glenrowan" (1946), which Bellew considered "too bloody big" (see National Gallery. Jack Bellew's name is also reported as Ballieu by John Ryan in Panel by Panel (p. 190). The Bellew spelling seems dominant in contemporary newspaper reports and internet reports.
4
Early issues also included Australian backups—Jim Atlas and Dr. Peril of Iggo by Stanley Pitt (known for his later science fiction comic, Silver Starr); Terry Flynn, Big Paul, ‘Two-Gun’ Barrel, Wildfire McCoy, Dick Hawke and Crackajack Daredevil by Michael Trueman; and Big Paul, Texan Wanderer and Jim Stern by Edwards. See Bonzer (Ed. Annette Shiell) and Keven Patrick's Arthur Mather: Man of the Atom.
5
Page 190, John Ryan, Panel by Panel (1979: Cassell).
6
Glen William (George) Warnecke (1894-1981) was an associate of Frank Packer and is credited with some of the innovation that created the publishing empire. After working at the Sunday Sun, he was the first editor of The Australian Women's Weekly from 1933 to 1939. He devised the concept; established its London office to access European news and stories about the royal family; bought Mandrake the Magician strips and Hollywood material; and negotiated the rights to best-sellers for serialisation. Warnecke was also editor-in-chief of Consolidated Press 1936-1939 and briefly went with Jack Bellew to Daily News during the covert takeover. During the mid-1940s, Barnecke worked as US correspondent to Australian newspapers. He married Irish soprano and poet, Nora Hill, in Australia in 1924 and settled in Ireland in 1957.
7
Stanley Clive Perry Turnbull (1906-1975) was born in Tasmania and joined The Mercury newspaper in 1922 before moving to the Argus (1926-1932) and the Herald (1932-1940, 1941-1949), including respected work as an art critic and a stint as foreign correspondent during the war. In 1949 the London Daily Mirror company bought the Argus with Turnbull's help and he became editorial adviser and later acting-editor in 1951, before leaving in 1952. Despite some continued journalism, he established his own business, including a public relations consultancy. He is best known for his book Black War examining the extermination of Indigenous Australians in Tasmania. He also wrote books of history, art criticism, biography and poetry.
8
See Kevin Patrick's Arthur Mather: Man of the Atom.
9
Atlas stopped using colour around mid-1949. KG Murray was also reducing its colour output at that stage with. Captain Triumph Comics became black and white at about the same time and the amount of colour in Superman decreased, although Murray continued to use some colour in Superman comics until early 1950.
10
Page 190, John Ryan, Panel by Panel (1979: Cassell). Varous reports have Captain Atom selling a million copies during its first year of publication in 1948 (for example, The Age 18/11/2006). In comparison, The Australian Women's Weekly had a a circulation in excess of 400,000 in 1939 (see Australian Dictionary of Biography.
11
See Kevin Patrick's "Flynn of the FBI: Case Closed!" at Comics Down Under.
12
The competition, closing on 10 January 1952, asked readers to rank Atlas's comics in order of popularity. The winners were announced in Captain Atom 50.