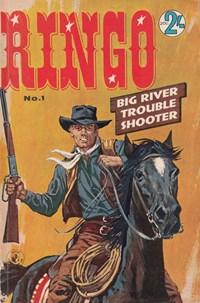 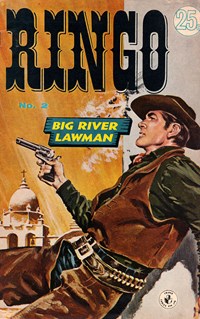 The first handful of Ringo issues continued the feature-length approach, which was uncommon for KG Murray at the time. Most of its comics were anthologies and the Ringo series soon reverted to a single feature story as well, backed up by reprints of other western stories from diverse sources.

After the Sunday feature was introduced in Ringo 24, the title established a new pattern of one Sunday story bookended by two episodes of Ringo, including increasing reprints. 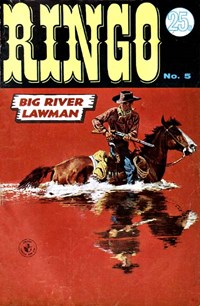 The final handful of issues returned to an eclectic mix of European and US stories, generally with just one Ringo episode. The decade-long publishing run in Australia, through to 1977, suggests the comic was a good seller, particularly compared without the short lifespan of Johnny Galaxy and the Space Patrol (Colour Comics, 1966 series), which began at the same time.

The title feature "Ringo" is renamed from "Gringo", a series syndicated internationally by Spanish agency, Selecciones Ilustradas. The lead character Syd Bicking is a white Americano (a "gringo") who defends the marginalised in the US south-west. The stories typically involve the hero siding with the Mexicans and native Americans in their battles with the white northerners.

Gringo was created in 1963 by artist Carlos Giménez (b.1941)22Carlos Giménez was born 1941 in Madrid, Spain, and began his career assisting Lopez Blanco. He did his first solo...   with author Manuel Medina33Little is known about scripter Manuel (Manolo) Medina. He was an agent for Toutain who scouted for talent in Madrid...   when the head of the SI agency, Josep Toutain, requested a feature specifically for the international market.44www.tebeosfera.com....   The series is reported to have been published in 20 countries.

The Medina/Giménez team completed 24 episodes of Gringo from 1963 to 1967.55www.carlosgimenez.com....   Subsequent writers and artists produced around 30 more episodes through into the mid-1970s.

1
Special thanks to Mark Muller, Kevin Patrick and Spiros Xenos for images, advice and comments.
2
Carlos Giménez was born 1941 in Madrid, Spain, and began his career assisting Lopez Blanco. He did his first solo work in the early 1960s for Éditions Maga before joining Selecciones Illustradas. In 1967, he formed the La Floresta group with Adolfo Usero, Esteban Maroto, Luís García and Suso Peña. He has created Gringo with Manuel Medina (1963), Delta 99 with Flores Thies (1967); and Dani Futuro with Victor Mora (1969). For the past 30 years, his work has been largely historical and biographical, including Paracuellos (1977), based on his youth in an orphanage, and Los Profesionales (1982), based on the Spanish comics scene. His new work on Paracuellos since 1999 was awared best work by the Salón Internacional del Cómic de Barcelona, and the Yellow Kid award from the Festival Internacional de Roma. See www.carlosgimenez.com and lambiek.net.
3
Little is known about scripter Manuel (Manolo) Medina. He was an agent for Toutain who scouted for talent in Madrid and set up a branch of Selecciones Ilustradas there ( www.carlosgimenez.com). Carlos Pino reports that he distributed scripts and paid the artists ( www.tebeosfera.com) and Luis García worked with him in 1965 as an extra in his "photonovel" comics ( www.tebeosfera.com).
4
www.tebeosfera.com.
5
www.carlosgimenez.com.