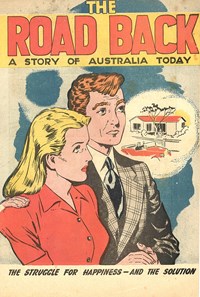 Published in the lead up to the 1949 Federal election, probably by the Melbourne Chamber of Commerce.

Thanks to a generous contributor,11Thanks, Doug Purton!...   AusReprints has a full scan of The Road Back—political propaganda in comic form. The comic is undated, but released ahead of the 10 December 1949 Australian federal election when Labor lost power to a new Liberal Menzies government. It's clearly original work, but it isn't in the common lists of Australian comics and there are no credits in the issue. 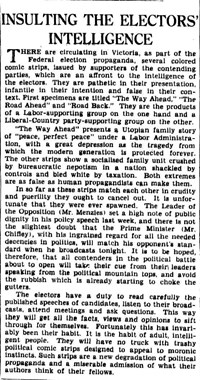 The Road Back urges a vote against Labor and portrays Prime Minister Ben Chifley negatively. However, it doesn't mention the opposition Liberal Party and its leader Robert Menzies, or its coalition partner the Country Party led by Arthur Fadden. The narrative is clearly pushing a vote for the coalition, but John Ryan is overstating it when he reports “the Liberal-Country Party groups published” the comic.22It seems likely that readers at the time generally concluded the comic was prepared by the Liberal Party. A letter...

Ryan bases his comments on the article he quotes from The Age on 14 November 1949. That report says the comics are 'the products of a Labor-supporting group on the one hand and a Liberal-Country party-supporting group on the other'.33Insulting the Electors' Intelligence (1949, November 14). The Age (Melbourne, Vic. : 1854 - 1954), p. 2. Retrieved September 3,...   Who might that group be?

The only indicia or credits in the comic are the printer—Rotary Colorprint Co. Pty. Ltd., 15 Hamilton St., Sydney—and the political authorisation - "D. Stevens, 35 William Street, Melbourne".

The Melbourne Chamber of Commerce

The printer doesn’t tell us much about the origin of the issue. It is part of the Yaffa Syndicate which provided services to just about every comic publisher at the time.

If an existing publisher was involved, one of the two major Melbourne companies—Atlas or Cleland—seems possible. Cleland, however, published only reprints and little original Australia work. The use of page numbers prefixed with an “A”, like Atlas comics, makes it tempting to suggest that company. However, Atlas founders Jack Bellew, George Warnecke and Clive Turnbull are strongly aligned with the left and Labor politics.

The authorisation address, however, provides a clue. It is the address of the now-demolished James Patrick Building. The site was formerly owned by James Ford Strachan, a prominent merchant and member of Victoria's Legislative Council between 1851 and 1874. By the early 20th century, the building was the home of the Melbourne Chamber of Commerce, which appears to be the sponsor or publisher of the comic.

Following the end of the Second World War, the Chamber actively lobbied for the end of wartime restrictions to free up commerce and campaigned against high taxation and the rising cost of government.44For similar themes, see the 1949 address of the President, Mr C. L. Kimpton, at the Chamber's annual meeting: Real...   It maintained an active campaign against the Labor movement and socialism, with D. Stevens authorising some other election-related material in 1949.

It's a Long Road 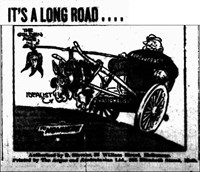 An advertisement in the 2 December 1949 edition of the Melbourne Argus mirrors the comic's key message of 'hidden taxes' making the family budget a nightmare. The advertisement is generally in comic format, telling of a day in the life of a hardworking housewife.55The Story Mum Might Not Have Time to Read (1949, December 2). The Argus (Melbourne, Vic. : 1848 - 1957),...   It is possible that this advertisement is by the same artist as The Road Back.

It could be a coincidence that the publisher of these advertisements is the "Argus" and "Australasian" Ltd, which had Mr Herbert Taylor as a director at the time. However, he was a former Chairman of the Melbourne Chamber of Commerce and he resigned in December 1949 due to a change in political policy when UK's The Mirror purchased the company.77"Argus Director Resigns (1949, December 19). Barrier Miner (Broken Hill, NSW : 1888 - 1954), p. 4. Retrieved September 3,...

But who is “D. Stevens”? Most likely not the artist, although it is a tempting possibility. Probably Stevens is an office holder at the Melbourne Chamber of Commerce who took responsibility for election advertising under Australian law.

Anyone recognise the art style or know more about this comic?—The Road Back (Melbourne Chamber of Commerce, 1949)