Chucklers did that? by James Zee 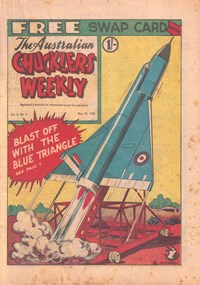 There’s a surprising wealth of international work in Australian comics, despite the dominance of US reprints—including one series reported as never published in English.11See Wikipedia entry (retrieved 2 November 2014).... 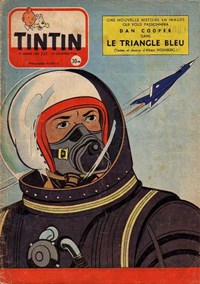 That feature was “The Blue Triangle featuring Dan Cooper”, which appeared two pages per week in The Australian Chucklers’ Weekly from v5#39 (23 January 1959) until about v6#30.

Chucklers’ Weekly was a popular children's magazine that ran comics, fiction stories, general knowledge articles, movie and music news, puzzles, jokes and readers’ advertisements. It also drew readers in through a multitude of competitions and prizes. 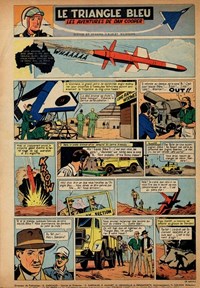 Each issue had a handful of comics, including US newspaper strip reprints, UK comic serials and original Australian work by creators such as Eric Jolliffe (Callahan’s Kids), Monty Wedd (Captain Justice and King Comet) and Arthur Hudson (celebrity biographies, such as Elvis Presley, Doris Day, Johnny Devlin and Debbie Reyonlds). The vast majority of issues also included a brief three-panel anonymous Joey Jumper strip modelled after historic UK comics, with text under an illustration.22Another comic reported to be Australian is The Twins at Silver Creek (1955-1956), but I've not yet been able to...

When I first saw the Dan Cooper series, I assumed it was possibly Australian or more likely sourced, like the long running Wendy and Jinx series, from UK weekly comics. 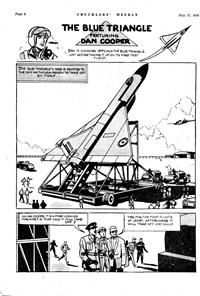 Instead, Dan Cooper was created by Belgian, Albert Weinberg (1922-2011), who wrote and drew most of the stories up to the 1980s. The series was originally published in French in Journal de Tintin (Dargaud éditions, 1948 Series), home of perennial favourite, Tin Tin.

The earliest adventures of Canadian fighter pilot Dan Cooper were science fiction, before the series settled into earth-based adventures with its later trademark realistic depictions of contemporary planes.

It is the very first Dan Cooper series that is published in Chucklers’ Weekly—“Le triangle bleu”, which ran 48 episodes from Journal de Tintin #323 (30 December 1954) to #370 (24 November 1955) before being collected in European album format for multiple reprints in several countries.

It seems likely that this story caught the Australian publisher’s attention because of its Australian setting, with the experimental delta wing jet tested at Woomera. But the fascinating question is--how did the publishers become aware of “The Blue Triangle” and secure the reprint rights?

1
See Wikipedia entry (retrieved 2 November 2014).
2
Another comic reported to be Australian is The Twins at Silver Creek (1955-1956), but I've not yet been able to find information about it. An unidentified series called Flash the Wonder Dog was also printed at the same time, during a period when the comics were printed as a 16 page insert (late 1955 until possibly mid-1956).