012340
An incident in the exploits of Captain Triumph 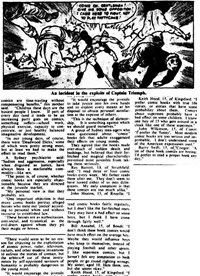 Are "Comic" Books Harmful to Minds of Young Readers? Part 2

A Sydney mother of four sons, the eldest 13, said yesterday —

"Any books of comics found around our house now are thrown into the incinerator The only exceptions are a few genuine 'funnies' The reasons for this ban, based on experience, are —

"(1) They make children lazy about other reading—the boys will not bother to read even good exciting yarns when they can get the quick and easy visual stimulus of the drawings. 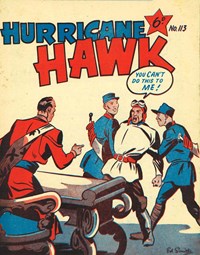 "(2) They are habit-forming—a sort of mental drug that takes up more and more time each day.

"(3) I object to their language. I know that some people claim that the language of comics is fine, 'nervous,' colloquial stuff. For one such phrase or sentence there are pages and pages on which the King's English is murdered.

"(4) The characters generally are either monstrous and deformed, or (to enable virtue to triumph over these abominations) impossibly endowed supermen and women. Children revelling in these worlds of phantasy lose then curiosity about real things Even my four year old had begun to run around dramatising himself as a 'comic' super hero.

"(5) In the drawing, at least there is a constant emphasis on sex probably designed to hold the eyes of adolescents and undeveloped adults. 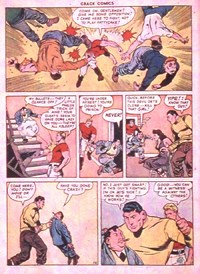 Page 14 of the story from Crack Comics 55 (Quality, US), including the image from the 1948 Sydney Morning Herald article..

"It boils down to the fact that comics are time-wasting without compensating benefits," this mother said "Children these days are the busiest people I know. If part of every day (and it tends to be an increasing part) goes on comics, something suffers—school work, physical exercise, capacity to concentrate, or just healthy balanced imaginative development. In our young days, of course, there were 'Deadwood Dicks,' some of which were pretty strong meat, but at least we had to make the effort to read them."

A Sydney psychiatrist said: "Sadism and aggression, especially when disguised as justice, have always been a marketable commodity—like sex. The point is, of course, whether comic books are especially objectionable because they are directed at the juvenile market. My personal view is that they probably are.

"One important objection is that many comic books portray alleged heroes who mete out justice according to personal whim and without recourse to established law. These heroes are as authoritarian, anti social, and tyrannical as the evil doers against whom they pit their magic or brawn. There would seem to be no reason for objecting to the exploitation of atomic power, radar, television, rockets, and other modern inventions to enliven the stones of comics, but the arbitrary use of these instruments by self-appointed saviours of humanity is probably dangerous to the young mind.

"It would encourage the juvenile to take justice into his own hands and to exploit every means at his disposal lo obtain personal satisfaction at the expense of others. This is the technique of dictatorship. It is something against which we should guard ourselves." 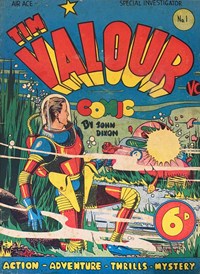 A group of Sydney teen-agers who were questioned about "comic” books felt that adults exaggerated their effects on young minds. They agreed that the books made over-much of sudden death and bashings, but believed that their far-fetched and magical characteristics prevented most juveniles from taking them seriously.

Ray Barrett, 13, of Strathfield, said: "I read three or four comic books every week My father reads them after me They don't seem to have turned either of us into delinquents My only complaint is that these comics are loo much alike."

John Heaton, 15, of Rozelle: "I read comic books fairly regularly, but I don't like the far-fetched ones. They may have a bad effect on some boys, but I think I have come through fairly well."

Bill Annabel, 15, of Bondi: "I don't think these book comics would have much effect on the average boy. Maybe they would influence boys who keep to themselves, instead of playing football and other sports. I like supermen comics, hut I haven't felt any temptation to bash people or go round righting wrongs. My sister, aged 10, likes them, too, but she seems okay."

Keith Hood, 15, of Kingsford: "I prefer comic books with true life stories, or stories that have some probability about them. Comics about supermen probably have a bad effect on some children. I know one boy of 15 who gets around in a cloak like one of these supermen."

John Wilkinson, 15, of Como: "I prefer the 'funny'. Most modern comic books are too serious and improbable. I don't understand some of the American expressions used."

Barry Swift, 15, of Coogee: "A lot of these book comics are boring. I'd prefer to read a proper book any day."